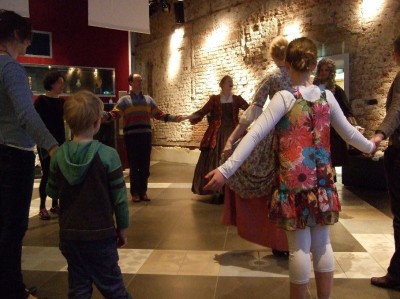 In 1713 Utrecht was full of diplomats from major European states. Spain, Great Britain, France, Portugal, Savoy and the Dutch Republic were on a mission to create a new power balance in Europe. These negotiations started already in 1712 and continued with a series of individual peace treaties till 1715. These treaties which established the Peace of Utrecht marked the end of French ambitions of hegemony in Europe. It ended the war of the Spanish Succession and the Queen Anne’s war. Remarkable is that these series of treaties found agreement outside the battlefield, and were accompanied by many cultural and artistic expressions. The city of Utrecht became the centre of Europe for a few years. Nevertheless, the treaty also marked the end of the Republic as a power in Europe, illustrated by the French representative Melchior de Polignac: ‘Nous traiterons sur vous, chez vous, sans vous’.

In 2013 the Dutch are celebrating the Peace of Utrecht by another series of cultural events. The ‘Archive of Utrecht’ created an exhibition about Utrecht in 1713 with stories taken from ‘Histoire amoureuse & badine du congres et de la ville d’Utrecht’ (1713) and in addition they wanted to bring to life the parties of the past. That is where my company comes in: Beleef Het Verleden / Experience the Past. I proposed a program with dance and etiquette in which the public learns steps of several dances of the past and are engaged in the old etiquette how to behave towards one another. They are welcomed by historical characters: Constantia Huydecoper and Jan Karel van der Meulen, people of the higher class who lived in Utrecht in 1713. They engage the public in first person interpretation.
The set up is as follows: 15 minutes of introduction and telling stories and then 30 minutes of dance lessons, while continuing to engage the public with the subject. When people easily pick up the steps, we allow us the liberty to have little gossip talk while dancing. If they are too focussed on the steps, we just guide them through the dance. After the dances we give the people another 5-10 minutes to ask questions.
So what do we talk about? We tell the public who we are, which year we are taking them back to, and we tell them that we are going to teach them some dances and refresh their memories how to behave at a ball. We also ask them whether they are aware of the situation in Utrecht in our year (1713) and if they have met any of the diplomats or heard stories about them. The people that have visited the exhibition are sometimes able to bring up names and stories that they have just read. Posters with comic characters of the time that are put up in the toilets are also helpful in integrating the exhibition into our program.

We have done a series on Friday evenings in April, May and June and are now starting a new series on Sundays in October, November and December. Both series have a very different audience.

The Friday evenings were focused on ‘having fun’ for people who are just coming in on their way to a bar or restaurant and giving this public ‘dirty’ details of the past. Did you know that Duke Passionei, representative of the Pope, is found at every ‘divertissement’, is dressed to the latest fashion and is interested in literally EVERY woman whom he tries to please? And did you know that with the coming of the representatives the ‘French disease’ is making many victims and that in Utrecht, at the corner of the ‘Begijnhof’ you can buy a novelty, called a ‘condom’ to prevent you from trouble? The woman who sells and produces them from animal bladders, also exports them all over Europe.
Interesting details, but even though the client (Archive of Utrecht) would like us to tell these darker things, it is very hard to bring it up, while you are teaching people dance-steps and the etiquette how to behave. I realised these intriguing little facts about the past can only be told to people one on one, like gossip would pass during a ball, just one on one. So we started whispering things into the ears of the public, while dancing. As you can imagine it is not easy to dance and tell stories at the same time.
Another challenge was the coordination with other activities at the same time. In addition to our ‘dance and etiquette’ there also was a performance by a storyteller and musical performances. The times usually overlapped, which meant people would want to leave in the middle of a dance because they wanted to see another performance. But more distracting were the erotic images of the 18th century that the client projected in the ‘ballroom’ while dancing. Quite a challenge as well.
Back to the other audience: the Sundays are meant for families and therefore are much more focused on stories for children. Again we take them back to the year 1713. Where do you go to school? Did girls go to school to? Have your parents found a partner for you yet? But also, why are all these diplomats in town? What are they doing here?
It is fascinating to see how you can correct people’s behaviour when you are in role, and which liberties you can permit yourself (to a certain extend) that you would not allow yourself in real live. On the other hand the role restricts bringing up certain topics and certain behaviour that the client would like us to perform. There is always a balance to be found between ‘remaining true to history’ and the education goals of the program.
Even though the stories we tell are thoroughly researched, as well as the historical characters that we portray, we are teaching about the past rather than giving a representation of the past as it were. The latter is more in the foreground when we inhabit a castle as the former inhabitants and show a day in the life of… The place we are using for our interpretation is not helping either to visualise a past as it could have been. 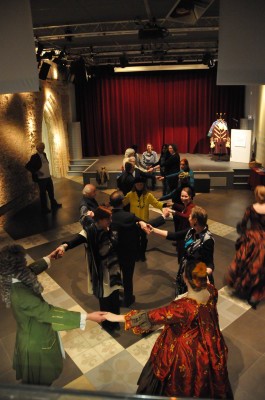 As you can see the space we use is theatrical, with a real stage, which we are not using, with some old historical elements, which have little to do with a 1713 ball-setting. We are in an archive after all.

Is first person interpretation the right vehicle here? The fact that we are in role makes the people want to play the game of the ball with us. It makes them want to behave according to the etiquette and it makes them inquire about our lives (as historical characters) and the lives of the diplomats far more strongly than a lecture would trigger people to ask questions.
When we read people’s responses to our program we only encounter positive notes. “It really brought the past alive”, “we had so much fun”, “we loved the dances” and so on. When people dress up in the two costumes that are provided by the ‘Archive of Utrecht’ they are happy as children. It does not seem to bother them at all that the costumes are not the right size, not the right fabric, they are closed with velcro and sometimes a ladies skirt falls down during the dance because it doesn’t really close well. The people are having fun, and in that setting are open to learn about what was happening in Utrecht in 1713 and how people behaved. Even though I am usually quite ‘tough’ with wanting everything to be done historically correct this ‘laissez-faire’ seems not to have a negative effect on the public, ‘au contraire’, they are really enjoying the little insights into the past that we are giving them.
I’m not saying we should just lower our standards and just wear whatever, but it is not wrong to leave things to the imagination of the visitor. And it is not wrong to ignite a spark of interest by using an easy accessible format. Perhaps we as professional interpreters are sometimes forgetting that the representation of the past we give does not need to be perfect to arouse curiosity and imagination. These elements + ‘having fun’ are the first steps to learning and helping the public to have a better understanding of the past.